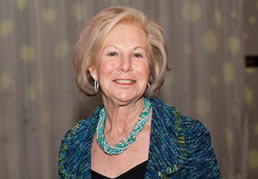 As an estate planning attorney, Jane C. Bergner helps others decide how to best support their favorite charities. Personally, her bequest decision was easy: Jane lights up when she talks about coming to a Kennedy Center performance.

"One of the greatest evenings I've ever experienced was forging my way through a snowstorm to the Kennedy Center to see the Mariinsky Ballet perform Sleeping Beauty," Jane said. "It was a magical performance—the whole experience was like a fairytale."

Jane earned her law degree from Columbia University and was asked in the early days of the Kennedy Center to do some tax work for the American College Theater Festival. She and her late husband, Alfred, were quickly hooked.

Jane and Alfred, who attended Harvard Law, opened their own law firm in 1993; nine years later Alfred died from a brain tumor at the age of 59. As longtime subscribers and donors, the Bergners for years attended ballets, concerts, and operas together. Jane prefers opening night of a ballet but closing night of an opera—because on the last night "they always sing their hearts out."

"No other venue in the United States presents as many of the world's major ballet companies each year as the Kennedy Center. Truly a national treasure!"

Jane says an estate gift is an ideal way for women donors with financial responsibilities to support the charities they love. "Many people are reluctant to give now because they may need the money for medical expenses, children, or grandchildren," she said. "A charitable bequest allows you to say thanks for all the pleasure you have received over the years. I am so grateful for what the arts have done for me."